Visit England website is a tourist promotional site http://www.visitengland.com/ . The aim is to promote England as an attractive tourist destination.  The website is an ideal medium for this because it has a global presence on the internet and can be accessed by anyone from around the world.  The site contains many attractive images and low in text, this helps to sell England as a tourist destination, the high number of photographs are especially important to sell England as tourist destination for people who may wish to visit from abroad where English language is not their first language and may struggle to read large amounts of descriptive text.

The Visit England homepage has a large attractive colourful image of the English seaside on a bright summers day.  The sky is blue, the sea is blue with gentle breaking waves on a colourful shoreline and an interesting rock face in the background (Durdle door).  The view of the sea has overlayed upon it a picture of “Shaun the Sheep” looking to be taking a ‘selfie’ There is also a contrasting image insert image of the English countryside with walkers.

The website image is intended to be visually attractive to encourage people from overseas to visit England on holiday, and for people in the UK to stay and explore England as a holiday destination.

The image of the seaside is intended to be attractive to people looking for beach holidays, the beach in this picture is deserted, something that is attractive to many holiday makers.  The picture of Shaun taking a selfie is aimed to introduce a sense of fun, and also attractive for children or parents with young children.  The picture of Shaun is used as a ‘guide’ to England. There are a series of pictures from around England that feature Shaun visiting the sites, the use of Shaun also highlights that there is a “Shaun the Sheep” art trail that is being run in London and Bristol during 2015.  “Shaun the Sheep” is ideal as part of the advertising campaign because “Shaun the Sheep” is a popular children’s TV program sold around the world, and therefore would appeal to a wide audience from other countries.

The contrasting insert picture of the family of walkers rambling through the countryside is to appeal to the family audience.  The image has a nostalgic look of warm family summer holidays and days out for picnics.

The DVD front cover is for a Japanese TV animation series Fullmetal Alchemist Brootherhood. The graphic on the cover is in the Japanese comic/graphic novel art form of Manga. The cover art work on the cover of the DVD gives the viewer a strong indication that the DVD will be an animation in the Manga style. 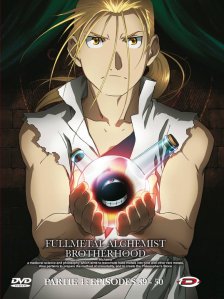 The DVD cover has some text added to inform the viewer of the title, the DVD logo to indicate the format of the media and details about which episodes of the TV show are included on the DVD. In small text below the title of the DVD is a brief description, this is very helpful to people outside of Japan that may not have seen or be aware of the storyline of the TV series.  The fact that the text on the front cover is in English indicates that although the TV series was for the Japanese market, the DVD is intended for an English speaking audience.  You would have to read the back cover to confirm this and also which DVD region/country (0,1,2,3,4) it is intended to marketed for.

The genre that this film is teen/adult animation with an adventure fantasy thriller storyline.  This is conveyed by the way the lighting has been used in the image, a dark background.  The character shown is the main character of the show Edward Elric in shadow on the front cover is holding very carefully, the hands are almost in a praying position holding a chemistry bottle that looks to be glowing giving off light.  The chemistry flask is drawn in such a way that the contents has potentially powers, possibly magical or mystical power.  The colours used in the picture attracts the audience because of the simplicity of the colours and picture so the cover is not overloaded with distracting detail making the cover overall look more bold and mysterious.

The magazine is Kerrang.  Kerrang! is a UK dedicated heavy metal music magazine aimed at rock fans.  The content is aimed at mainly a male dominated youth to 30 year old market.  The content of the magazine is details about live band gigs, reviews of new and old metal or rock bands.  Band news and reviews of album releases or concerts, interviews and changes in band line-ups plus posters and plenty of photographs of bands performing.  graphic style that is used is grunge. 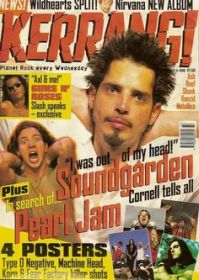 The graphics on the cover is a montage of pictures of musicians, bands that feature within the pages of the magazine issue.  The images of musicians are ‘cut around’ and overlaid on top of each other and placed  at angels in a scrapbook style. The cover has headlines, band names and comments and quotes from and about the content inside the magazine splashed across the pictures in a style very similar to the celebrity gossip magazines of Chat or OK magazine with the use of different font sizes, colours. The hectic layout text style is big to attract the audiences attention and it is also in red which suggests danger to make the cover and magazine more interesting and bold to read. The way the text and images on the page is overlapped and busy with pictures that don’t always fit making the page look as though it is shouting out to the reader, which is what grunge is known for.   The genre that this is to attract the rock fan and appeal to their loud ‘in your face’ approach used in is rock music. This is also sometimes used in rock or punk album covers.

comparing the styles together

The styles are very different because they are intended for different target audiences for very different products, tourist to visit England, youth to buy and watch a DVD, heavy metal fans to buy a magazine.

The Visit England site is a very polished tranquil site full of elegant and attractive images of places of interest and beauty in England, aimed at an adult market that will be making decisions where to spend a lot of money on family holidays or short breaks to visit places or events.  The images expand to fill the web browser window and show high quality pictures.  There is minimal text, but there are web navigation buttons displayed across the top, a common website navigation layout design.  Once the user is exploring deeper into the website additional navigation buttons are displayed down the left hand side.  The large inclusion of Shaun the sheep, an animation character also adds to the target family audience and offers a fun appeal to visit England.  The use of Shaun the sheep also reinforces a ‘Visit England’ advertisement campaign that is being used to promote England as a tourist destination.

The DVD manga front cover is intended to attract fans of Japanese animation manga stories, the art work is stylish and immediately conveys this because the cover graphic, the image taken from the DVD or has been specially drawn.  The use of a single main character gives immediate recognition for existing fans of this series of animation.  The high quality fantasy cover art work gives an idea of the quality of the artwork used in the DVD animation.  In this respect the web site and the DVD cover are similar in conveying the content and quality of the product and both use recognisable animation TV characters.

The DVD cover also displays facts about the content, it is a DVD plus the short title and brief description of the content because western viewers may not be familiar with the ‘Fullmetal Alchemist’ Japanese series of stories.

The Kerrang! Magazine cover contrasts very much with both the website imagery and the DVD cover. The Kerrang! Cover contains lots of images and text colliding, and has multiple fonts and font sizes and colours all laid on at different angles, an audience that is normally quiet loud and expressive.  The cover design would require a great deal of photographic editing to isolate the images of the musicians and add the text. The frantic cover of Kerrang! Will be appealing to the heavy metal fan, whereas the same style of approach if applied to the Visit England site would be unlikely to attract the intended audience of ‘middle class’ tourist with money to spend in hotels, restaurants, historic houses or places of interest. The angled layout of images and text on a website would also be confusing for navigation, as to which text or image would take the user to an item of interest.

All the products would have required some photographic editing and applying layout for the addition of text.  The DVD cover to have the DVD logo added, the text for the title and episode information. The images used in the visit England web site would also require photographic editing to add in Shaun the sheep.  Some additional editing may have been applied to the England pictures to remove or airbrush out any unwanted features that may be included in the photographs such as litter, telephone, electricity poles or cables.  The colours may have also been adjusted to make the photographs look bright and richly coloured.