Focal length, is described in millimeters (mm), is the basic description of a photographic lens. It is a calculation of an optical distance from the point where light rays converge to form a sharp image of an object to the digital sensor or 35mm film at the focal plane in the camera. The focal length of a lens is determined when the lens is focused at infinity.

The focal length tells us the angle of view—how much of the scene will be captured—and the magnification—how large individual elements will be. 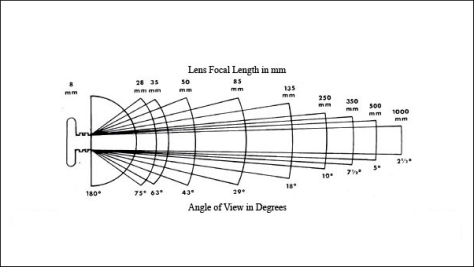 The longer the focal length, the narrower the angle or field of view and the higher the magnification, the camera has to be further away from the subject to focus the image. Less distortion or ‘bending’ of images.

The shorter the focal length, the wider the angle or field of view and the lower the magnification,  the camera can be up close to the subject to focus the image. Greater the distortion or ‘bending’ of images.

A photograph taken with an 18mm focal length, sometimes known as a wide angle lens will capture a wide area, subject items in the photograph will appear as if they are further away from the camera when compared to a longer focal lenses such as 35mm, 55mm, or 80mm.

When taking photograph of a standing person with a wide angle lens, the head of the subject is in-line with the camera lens will look near normal, but the body will appear slightly shortened due to the perspective and distortion created by wide angle lens.

When using a 18mm focal length lens, taking a photograph of the full front of a church from ground to roof, the building at camera level will be the least affected, but the perspective of the walls above the ‘eye-level’ will appear to slope up and tilt backwards.

This lens is often used on fixed focus compact cameras because it is a compromise between a wide angle lens and a standard 55mm lens. The curvature and distortion is noticeable when objects are photographed close to the camera. But has the benefit of taking wide landscapes.

55mm focal lens, sometimes called the standard lens captures a field of view similar to the human eye field of view. Subject items will appear closer than the 18mm or 35mm lens.

The shorter the focal length of the lens, the greater the depth of field. For the same f-stop compared to lens with long focal length that has a shallower depth of field. This lens has some distortion of perspective, but it is much less noticeable than 18mm focal length lens, typically the photographer is standing further away from the object, and the smaller field of view decreases the change in perspective, unless one is taking a photograph of a tall building from near the base of the building looking up to the sky. Then you will see some distortion of perspective.

80mm focal length lens the object is magnified, subjects further away appear much closer, and the field of view is narrower than a 55mm lens. There is less distortion of perspective.

Many portrait photographers prefer to use a lens around the 100-150mm focal length. This is because of the shallow depth of field, a portrait usually does not want to have distracting background elements clearly visible, but thrown out of focus.

In these series of experimental shots the subject was stood against a wall, the camera settings remained the same, the only thing that changed was the focal length of the camera lens. Camera used was a Nikon D3100, ISO-200 F-stop f/5.6, exposure 1/500 second. 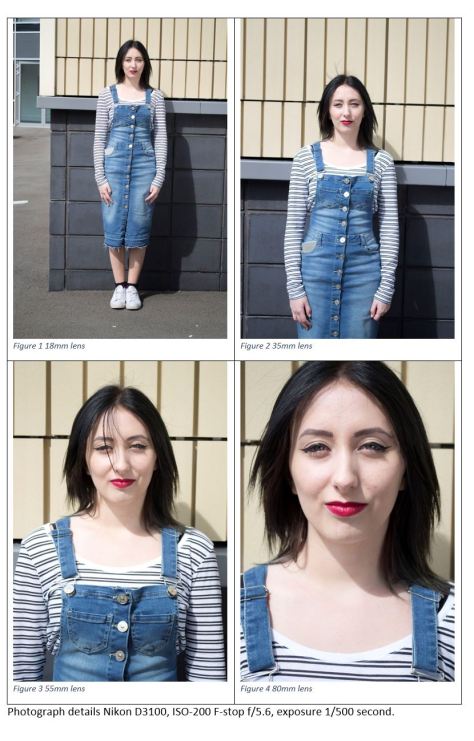 Another reason for using a longer focal length lens is that the longer the lens, the less distortion of the image. A wide angle lens can slightly alter the proportions of the face, the portraits face appear slightly wider compared to the height of the face. 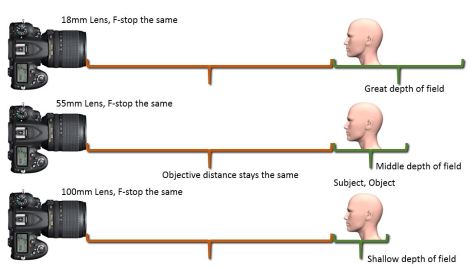 A recent article that was published evaluating portrait photographs with different focal length lenses (50, 85, 105mm). The images were tightly cropped to show only the face that filled the picture. The faces taken with the longer 105mm focal length viewers found to be more attractive than wider angle 50mm lens shots of the same face.