I believe these pictures have worked, I have produced a series of photographs that I intended to produce. The model and surrounding area is well illuminated. The angles of the walls, handrails and pillars all frame the model and lead the eye to focus on the model in the centre of the frame. The orange door behind the model frames her head. There is high contrast between the white walls, white ceiling, the coloured handrails, bright yellow curb strips and the dark floors. The proportions of the model fit the portrait image.

I had used this car park for a previous assignment, because I really like the industrial atmosphere it gives.

How did I create the pictures?

I created these pictures using a digital SLR camera, shooting pictures in RAW format to make it easier for post processing and editing if needed.

The model was asked to stand facing in 3 directions Left, Right and straight at the camera. Only the available car park fluorescent lighting and natural light was used. A reflector was used to help bounce light from the lamp and natural daylight on to the model.

I had used this car park for a previous assignment, because I really like the industrial atmosphere it gives.

How can I improve the pictures?

I can improve the pictures if the model wore coloured or light trousers, wearing dark trousers the models legs are blending into the background.

Additional studio lamps might help make improve the brightness of the white walls and throw more light on to the model. Unfortunately because the location is very public without additional help it was not possible to set-up and use additional lighting.

The addition of a luxury sports car in the background or motor bike or motor scooter for the model to sit and pose on might have added more interest.

Changes of clothes could also have improved the picture, the same model in changes of outfits to give some variation. The logistics of time and facilities to change prevented this from happening.

A male model with the female model would have introduced a more interesting dimension and would increase the diversity of the intended male and female magazine audience.

Does it fit in with the brief?

The photographs fit are fashion orientated, the female model in a ‘male’ environment is intended to be attractive to both genders. The use of a young model so that the audience can identify with the age range. The clothes worn are stylish high street fashion that is within the budget of most people of the target audience. No exclusive designer goods were used.

There is space in the photograph around the model for the publishers to include the magazine additional information that will need to be added to a magazine cover; magazine title, issue details, price, details about feature articles.

Discuss how your front cover will appeal to the audience

This front cover is intended to appeal to the mixed sex audience because of the environment that is masculine and contains images of a female model. The use of a models with a body shape that is close to a ‘real’ body shape, not the perfect skinny model and airbrushed features to create an image that would make the audience feel defeated by ‘perfection’.

The intention is also to use the model wearing everyday casual clothes so that the audience can identify and enable the intended to form a connection with the model.

Explain the thinking behind your front cover idea

The thinking behind my front cover was to make the pictures focus on the model and taking close-up pictures but still covering here identity. This would suggest that what you see even though you can see something is not always the truth. 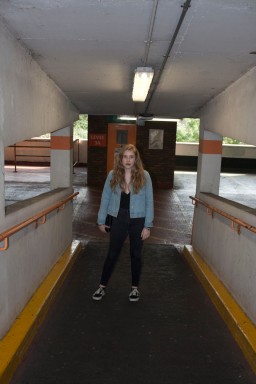 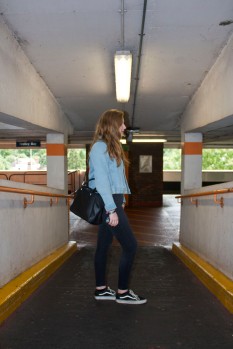 These issues are over and above the requirements of Health and Safety for a studio.

Is there a safe and secure place to leave equipment?

If the model is required to change clothes, is there a safe secure and private place that this can be done?

Will you be working where pedestrians could cause you a problem, or you cause a problem to pedestrians?

Do you require pedestrians to be removed from the location?

Do you need a permit to photograph?

Do you require additional props? If so could any of the props be considered ‘dangerous’?

Is the location a known area for crime?

Do you need assistants to hold items and to be an extra pair of eyes and ears while the photographer and model(s) concentrate on the shoot?

Is the time of day going to cause problems for access or increased risk from any of the above identified potential risks?  Day time or night time

Will there be electric power points available?  If power is available attention will be required to ensure the trailing leads are not going to cause a trip hazard or sharp objects will not cut the cables.  The power sockets are not overloaded with more equipment that is permitted to  draw too much power.